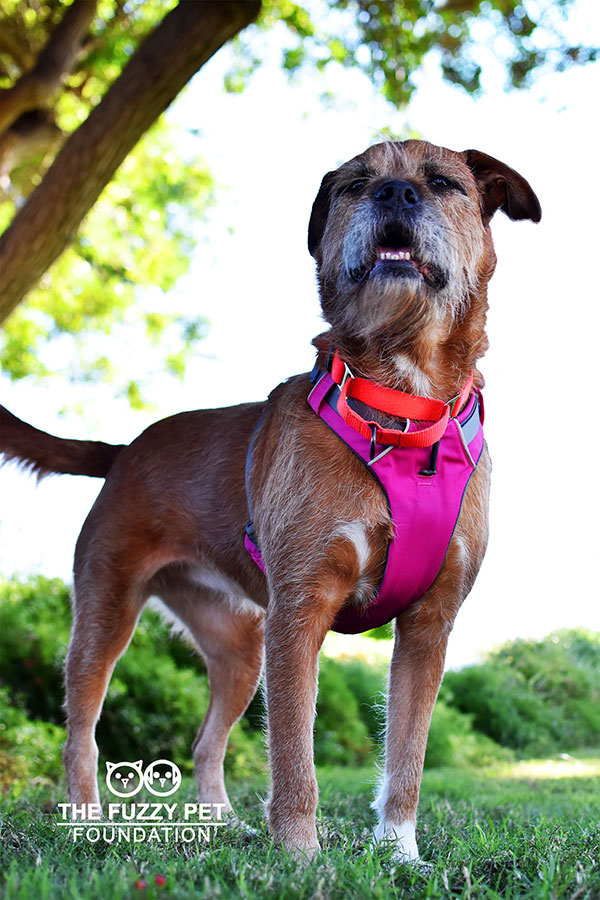 Amy’s story is a sad one. She was once used as a “guard dog” at a warehouse for two years, called various names, “stupid dog,” “ugly,” “hairy beast.” When the warehouse shut down, the owner decided to throw Amy out on the streets and left her to suffer and die on her own. She was hit by a car and did her best to survive on food scraps she found at a nearby dumpster.

When The Fuzzy Pet Foundation rescued Amy, a Terrier-mix, she was very skinny and she was hobbling around on three legs. We took her to our vet and spent many months treating her leg injury. We gave her a ton of love and helped her see that not all humans are cold-hearted and abusive.

Amy now has a clean bill of health and she is ready for adoption. She has waited 742 days for a forever home. Will it be your home? Amy is active and she lives for her walks. Inside the home, she is a big cuddle-bug and would do anything to please her humans. She plays with toys, and will even play fetch. She loves to give kisses, knows how to “sit,” and asks for belly rubs by flopping down on her side and wagging her tail.

Amy has been around one of our volunteer’s giant Mastiff dog and loves her dearly. She has also cared for little puppies in her foster home by licking them and gently wrestling with them. She has never lived with cats before, but Amy doesn’t appear to have any prey drive (from what we have observed during her walks and visits to the vet’s office where she is exposed to other animals in the lobby). Amy doesn’t seem to like alpha dogs who bark and lunge towards her; she would bark back at them and show them her disapproval.

Amy, three years old, now weighs a healthy 65 pounds and she can be quite strong when walking her on leash. As such, we are looking to place Amy in a home with mature adults only, and no young children.